Some people don’t have an appreciation for a good party game but that’s their loss!

Everyone with a closet full of board games at home knows how to spend a Thursday night the right way! Then there’s the new breed of “card match” party games… Some of those are good, too!

Look, there are all different kinds of game but the most important thing about a game is you’ve got to get other people interested in playing it with you. Otherwise you’re just playing with yourself…

Anyway, so here are a bunch of fun games that also look like they’re fun games, which makes it easier to get someone to play one with you! When you’re trying to get someone to play a game with you, nothing suckers them into it like a sense of obligation when it’s a tie-in to one of their favorite movie or show franchises.

Always a good idea to keep a few of these type of games around!

Remember, sci-fi fans are some of the most hardcore fans out there, so grab something geeky and leave it laying around like bait.

Here, this one is called Firefly Fluxx and it’s a game for fans of Firefly or Serenity or anyone you’ve ever heard say the name “Joss Whedon.” Statistically, nearly everyone who’s made it this far in to the list will have had a positive response either to the the first entry or the second one.

LabyrinthPlenty of people will at least want to see how the game sets up (since it’s about being in a labyrinth) isn’t sci-fi but it’s the same sort of deal – one of your favorite movies when you were a kid, David Bowie, etc. so it’s got a high “unboxability” quotient.

#3 Everything Is Dolphins RPG This is such an old-school RPG that it’s played on paper.

Called Everything Is Dolphins, we honestly don’t really know what to say about this one. It seems like it was created by someone who was tripping on acid at the time. You should be really good at this game because you’ve already been playing it for years.

It’s the game where you ask yourself, “Hmmm, is this person drunk, stoned or stupid?

Most people play this game with their friends every day. Anywhere from 2 to 10 players can get in on this one at a time. The name is so weird that it makes people curious. You can just show them some of the cards to get them more interested at that point! This is one of those games where you’re going to be tempted to just go through all the cards by yourself and look at them all. (You know, how you used to do with the Trivial Pursuit cards to try and seem way smarter than you really are…)

The problem is that the cards in this game are such beautifully drawn, original pieces of art representing pictographs of famous television shows from over the years.

Each card has three images on one side. Those are clues to help you guess what TV show the images all relate to and represent. The other side of the card has the answer of course, along with a fact about the show and a quote and a blooper too! It’s the best when something you love to play jumps out of that format and into an entirely different format for you to play it in a new way!

The reason they made 19,000 Mega Man video games is people love to play them. This board game version of Mega Man looks fun to play, too, doesn’t it? Cribbage is a tough one.

It’s such an old people game but it’s still so fun!

Don’t make yourself wait to be in a nursing home before getting some cribbage action into your life! Put a little twist on cribbage to add one ingredient that’s so hot right now: zombies!

Zombie Cribbage comes with a deck of cards, a cobblestone road cribbage board and four scoring zombies! The mother of all card games: poker!

Keep it casual and everything’s cool but don’t let any of your friends make any bets they can’t afford to lose. You’ve seen Rounders, right?

On second thought, maybe a complete poker set themed after the Joker from Batman isn’t the best idea… That guy’s a little crazy…

This one is so simple to explain that an 8 year old kid could play it but the strategies are so varied that you could see grown adults yelling over a game!

But you gotta keep your cool in Zenmaster, the card game when you get matches each time you put one card against a card from your opponent (high card gets you black matches and low card gives you white ones). At the end of each round, a white match and a black match cancel each other out, so you want as few non-matched matches as possible!

Wait, maybe it’s easier to explain in person than with words… Sequence is a game that you pull out when you’ve got someone over to the house who really appreciates games as much as you do.

This is such a new concept because it pulls from a very wide variety of games to work… But if you’ve ever thought “Man, I wish we were playing poker right now instead of rummy” after looking at a hand, then Sequence may be the game for you! 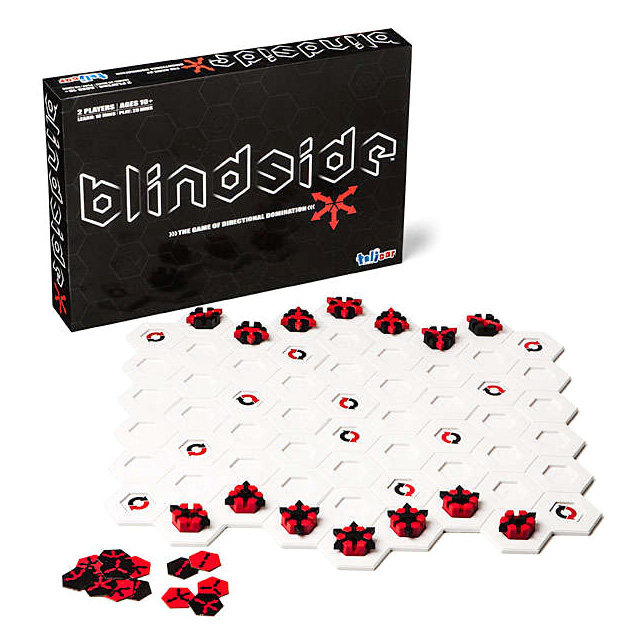 Blindside is exactly what happens when you combine checkers with chess.

That sounds crazy but you’ll get the hang of it fast and each game piece is a ton of help because the design of it literally shows you what moves it can make!

Oh, the game board is modular, by the way. You can set it up in different ways… And, hey – if you love games so much to make it all the way to the end of this list, then maybe you’re a collector or something.

Here’s this “real life” Tetris Link game that must be insanely rare or something because the price tag on it is NOT messing around!