Finally, the real professionals of pranking can get back to our regularly scheduled program of pulling the rug out from others on the 364 days a year they aren’t expecting it. It’s so much sweeter!

Today we’re happy to present a brief list of items every merry prankster can add to their arsenal, covering the full spectrum from mild ribbing on a G-rated level all the way to the nastiness – let’s get to it! If you’re looking for the nasty stuff, keep scrolling. (Or hit up the pranks department of drunkMall!) We’re starting things off light with the Pranklopedia.

You aren’t going to read about upper deckers or fishbombing an enemy’s car in this book. These pranks are safe for the eyes of grade school children, which means you should be able to get away with at least a few of them in even the lamest of office environments. Have you ever had a cricket get inside your house?

It’s one of the most maddening things that can happen in life. Something about the frequency of a cricket chirp makes it seemingly impossible to figure out where the damned thing is. Now you’re probably aware that crickets are available for sale online by the hundreds but you’re not that vicious are you? (You are. Here’s a link.)

There isn’t any subtly in swarming your victim’s house with 1000 crickets, really. Go for the slow-burning gag with this “electronic cricket” kit. It includes a temperature sensor so the “cricket” can realistically chirp more frequently as the temperature rises. It’s a kit, so there is assembly required.

It doesn’t get more pared down than this. Choose your victim and they’ll receive a phone call that tells them, simply, “Fuck you!”

Some would argue that this is more mean than it is funny. Not true. Remember when you were a kid and you’d do something that people laughed at and then try doing it again and again to get the same reaction? Some adult would inevitably tell you, “It’s only funny the first time,” right? Well, that’s just not true all the time. If you don’t believe that, try budgeting $25-50 towards some spaced out “fuck you” phone calls and see how much funnier it gets the longer it goes on. Mice aren’t scary at all but, for some reason, some people will absolutely lose their shit if they see a mouse run across the floor.

The problem with trying to use a mouse in a prank is that you can’t depend on it to do what you want. Even if you do manage to catch a mouse and get it into the house or office where you want it, the little guy is likely to just find a way inside the walls and make himself a home, never to be seen again.

A remote control mouse, on the other hand, will do exactly what you want it to do, when you want it.

#5 Rubber Duck with a Dick This one is more like a good gag gift than a “prank” per se. That being said, you could elevate it beyond a typical goof present if you manage to package it in a way that makes it looks like an ordinary rubber duck when the box is first opened…

They’ll think you just bought them a stupid present until they lift it out and see that it’s a rubber duck with a gigantic cock on it! Okay. For this one to work, the vic has to be someone who still drinks soda (or “pop,” if you’re a Northerner). With everyone trying to take care of themselves and eat healthy, these people are getting more and more difficult to find. But here’s what you do.

Since you can’t serve these fucked up flavors in the bottle anyway (because the label says it’s buffalo wing soda or sweet corn soda or whatever), you get creative with the truth. Say you found a great “soda alternative” and they’ve got to try it.

It isn’t a lie. If you wouldn’t call these crazy drink flavors an alternative, what would you call them? That’s Marketing 101, boys and girls.

#7 Rickrolls in a Box Rickrolling has got to be the most common online prank by now. You know what it is because we all do. The only problem with rickrolling is that it’s just so damn old…

Fortunately, someone found a way to reinvent the rickroll by taking it out of cyberspace and bringing it into the real world. All you’ve gotta do is put in your mark’s address at checkout and they’ll have a rickroll in their mailbox in no time! 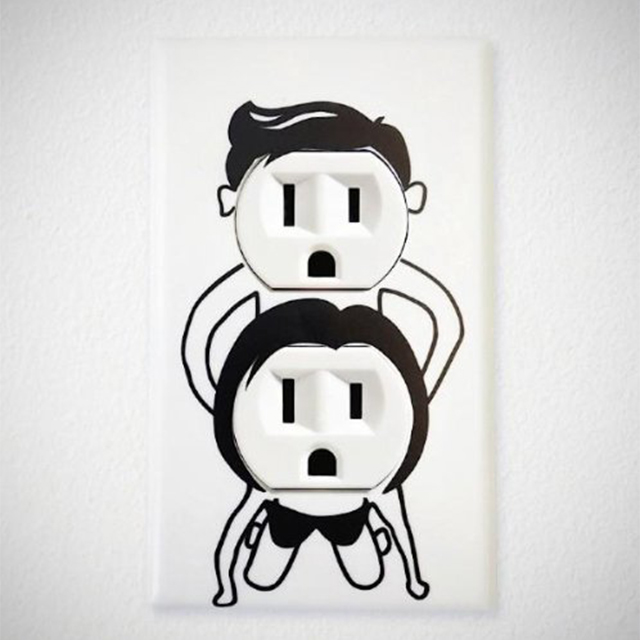 This one requires unmonitored access to the target’s place of residence. But that’s probably for the best because this isn’t the kind of thing you should be doing to someone’s electrical outlets unless you know them well enough to know they’ll laugh about it.

Here’s a bit of advice: do find an outlet in the house that doesn’t get used every day but also don’t pick one that never gets used. You don’t want to hit a spot that won’t get seen until the day they move out, if ever. Probably an outlet in the laundry room or something like that would be best. Ever had your friends draw on you when you got too drunk and passed out at a party? Probably, yeah. It happens!

But it takes a long time to draw something and you’re basically tickling them the whole time, so they’ve got to be wasted to not wake up in the process. Temporary tattoos are way quicker to apply and less noticeable in the process. If you don’t remember, all you have to do is put the temporary tat facedown on skin and hold a damp sponge to the back for a minute.

Bonus points if they piss their pants from the warmth of the sponge?